Marc Piollet takes over the conducting for the fifth symphony concert of the Saarländisches Staatsorchester. The programme includes works by Vasks, the 4th Symphony of Johannes Brahms, as well as the Concerto for Violoncello and Orchestra by Shostakovich. Soloist is Johannes Moser.

The new production of Tristan und Isolde takes Marc Piollet to the Teatro Petruzzelli in Bari. The performances initially planned for April/May 2020 can now be staged in January 2022.

The concert of the Junge Sinfonie Berlin planned for this September, with the programme Martinu “Memorial to Lidice”, Brahms’ violin concerto with soloist Mayumi Kanagawa and Shostakovich Symphony No. 8 unfortunately have to be postponed due to the Covid 19 pandemic.
The new date is 28.09.2021, 8 pm – as usual in the Berlin Philharmonie.

As in the 2015/2016 season, Marc Piollet will be guesting in Belgrade this year for a concert engagement with the Belgrade Philharmonic Orchestra. This time – more precisely, on November 8, 2019 – with a program that will make clear Berlioz’s musical-historical connection to Beethoven: Ludwig van Beethoven’s First Symphony will be followed by Hector Berlioz’s Symphonie fantastique, which was inspired above all by Beethoven’s oeuvre and is considered one of the most important program pieces.

In June Marc Piollet sees the next opera engagement at the Cincinnati Opera. He is invited to the Cincinnati Symphony Orchestra to conduct Mozart’s Le nozze di Figaro on June 13 and 15, 2019.

In 2014, Marc Piollet gave an enthusiastically recorded opera debut in Cincinnati with Bizet’s Carmen. The Enquirer wrote: “One of the stars of the evening was the Cincinnati Symphony. In the pit, Marc Piollet made his American debut in a nuanced performance Bizet’s colorful score.”

Marc Piollet and Piotr Beczala are regularly working together with pleasure. At the moment both are on a tour with opera arias including extracts from Verdi’s Luisa Miller, Puccini’s Tosca and Turandot aswell as Bizet’s Carmen: After a first stop beginning of November in Dublin with the RTE Orchestra, the tour continues on November 24 in Barcelona with the orchestra of the Teatro del Liceu, where Marc Piollet lately conducted Puccini’s La Bohème, and finally on November 30 at Palau de la Música with the Valencia Orchestra.

Marc Piollet is a regular guest at Teatro Real Madrid and will be back from October 12 onwards. This season brings the first guest performances of the Deutsche Ballett am Rhein:  Together with the choir and the orchestra of Teatro Real they bring Brahms’ Deutsches Requiem on stage under the direction of Martin Schläpfer.

TV TIPP:
La Bohème from Teatre Liceu under the direction of Marc Piollet on October, 14, starting 8.30 pm on Mezzo TV!

Marc Piollet returns to Teatre del Liceu in Barcelona. In June and July he will be conducting Puccini’s La Bohéme (premiere: June 18). The production of Jonathan Miller is shown at Liceu for the first time, in 2015 it had its premiere at English National Opera. Marc Piollet knows La Bohème very well, he has conducted the opera many times, a.o. with Anna Netrebko as Mimi at Royal Theatre Copenhagen.
At Gran Teatre del Liceu in Barcelona Marc Piollet has already conducted Carmen in the setting of Calixto Bieito with Roberto Alagna as José and Erwin Schrott as Escamillo; the highly acclaimed production was published by Unitel Classica/C major 2011 on DVD.
In Spain Marc Piollet is also very well known at Teatro Real. The last time he conducted Wagner’s Tristan und Isolde in the spectacular production of Peter Sellars and Donizetti’s L’Elisir d’Amore. He did also Massenet’s Don Quichotte and the sensational dancetheatre-production C(h)oeurs by Alain Platel which was then shown at various important theatre houses in Europe and which is now available on DVD. In Spain Marc Piollet also conducted gala concerts with Piotr Beczala at Teatro Real and at Festival Peralada in Catalonia. 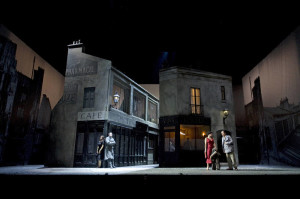